Teachmeets have been a part of the ‘fringe’ of the Schools History Project (SHP) Conference for several years now, but this year I decided to try something a little different. Inspired in part by Ewan McIntosh’s account of the early Teachmeets and the rules that had been lost along the way (including the ‘No Powerpoint’ rule) and in part by David Rogers recent ‘#TMSolutions’ event, the conference organisers agreed we could run it slightly differently.

We moved it to the bar, and in doing so took away the option for people to present via a big screen and there was no space for people to sign up to present in advance. There was however, a bar!

The first 4 or so minutes were spent with people noting down specific problems they had encountered, or questions they had on post-its. One point per post-it. These were then brought to the front and I hurriedly grouped them (roughly) onto sheets of flip chart paper. These were then spaced around the room and the for the next 15 minutes people wandered around adding their own suggestions and ideas as solutions to the problems that had been raised. In the final couple of minutes of this section I asked people to identify and of the solutions that they especially wanted to talk about / hear about / have a discussion about.

While I reviewed these we had the one (wrong word – more of an activity demonstration) that Lesley Anne had prepared in advance, which worked as a good break between the two sections and got everyone involved. If the video isn’t embedded below, click through to see what I mean!

#tmshp16 I love a woman who brings her own timer and horn to a Teachmeet! @LA_McDermott in action #shp16 pic.twitter.com/lQKglpwxlY

We then spent the final 25 minutes discussion four (I think) of the ideas that had had the strongest indication on the sheets that people wanted to talk about. Discussions and ideas bounced around the room, people got up to share ideas on the flipchart and with one exception I think every problem that was noted down had at least one solution to it.

You can see what we ended up with here. You can scroll through them below or see the whole set on Flickr 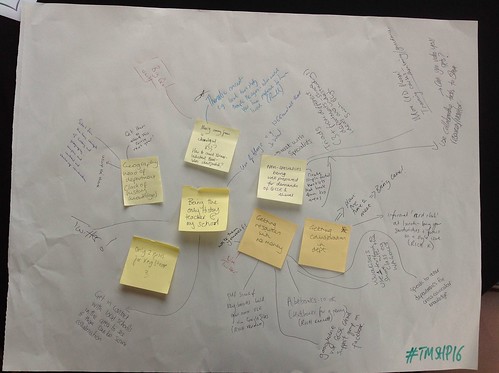 The feedback from those there seemed very positive, including from a number of people who had made a contribution to a discussion who would, but their own admission, not have signed up to present.

It was also interesting to talking to people afterwards who, until that point, had only encountered the large, sponsored, key noted events. I’m not knocking them – I think there’s a real place for them, but it’s always worried me that teachers leaving them might not walk away with that sense of ‘hey, I could organise one of these…’ that so enthused me at my early TeachMeets. Hopefully this got a little closer to that, and made sure that even those people who might not (yet) have the confidence to get up and talk for 2 or 7 minutes get to share their ideas and join the discussion.

One suggestion from a colleague was to limit the number of problems (perhaps to 2 per table) so as to make the sorting phase a little easier. While I don’t doubt it would, I think I’d like to keep the ‘all issues considered’ approach, but maybe move the ‘activity’ slot early to cover the sorting of the post-it’s into groups.

All in all, I think one I’m happy to mark up as a success! Thanks to everyone who’s contributions and enthusiasm made it so!